Join us at 7 p.m. Tuesday, March 17, for fiction and art by Gladys Swan and paintings by Amy Meyer.


Gladys Swan is both a writer and a painter. She has published two previous novels and seven collections of short fiction.

Her Carnival Quintet is now being published by Kiwai Media in Paris.The first novel of the series, Carnival for the Gods, was originally published in the Vintage Contemporaries Series. The other novels follow the adventures of those characters. She created the cover art for the novels.

She has earned the Prairie Schooner’s Lawrence Foundation Prize for Fiction, a Tate Prize for Poetry from the Sewanee Review, and multiple fellowships for residencies and retreats in both the visual arts and in writing. She was awarded one of the first Open Fellowships from the Lilly Endowment, for a study of Inuit art and mythology.

Her Western epic, A Dark Gamble, was published by Serving House Books in 2015. 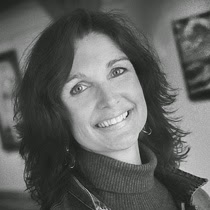 Amy Meyer studied art at University of Central Missouri and Indiana State University and earned her degree in painting and drawing from Columbia College.

She has had the privilege of having her work featured on CNN Online, on Les Bourgeois Artisan Wine labels and in Lake Lifestyles magazine. Her work can be found in private and corporate collections, including those of Water for Elephants author Sara Gruen, Houser-Millard, Inc. and Family, Hope and Recovery, Inc.

"My foray into the world of working with only color, texture and composition was not intentional. It developed over time. Having primarily been a representational artist, I find it challenging to explain a certain piece from this body of work. There really is no correct explanation. As I work, the painting evolves over time, beginning with no real plan, but primarily the intrigue of working with color and texture. Composition comes as the work progresses, layer by layer, which can be days or months from the time it began. My goal, if I were to have one, would be to create work that stands on its own, intriguing the viewer with the complex yet simple marriage of color, composition and texture."

Orr Street Studios is located at 106 Orr St. in downtown Columbia, Missouri. Join us the third Tuesday evening of each month during the academic year for literary readings and visual-arts presentations.
Posted by Orr St.'s Hearing Voices/Seeing Visions Series at 10:50 AM No comments: