Join us at 7 p.m. Tuesday, Nov. 19, for fiction by Chad Simpson, fiction by Scott Garson and paintings by Bonnie Chasteen. 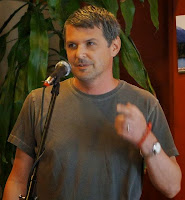 SCOTT GARSON
Scott Garson is the author of Is That You, John Wayne?, a collection of stories, and American Gymnopedies, a book of microfictions. His fiction has won awards from Playboy, The Mary Roberts Rinehart Foundation and Dzanc Books, and he has work in or coming from Kenyon Review, American Short Fiction, Hobart, Conjunctions, New York Tyrant and other publications. He edits the Pushcart-Prize-winning journal of very short fiction Wigleaf.

CHAD SIMPSON
Chad Simpson is the author of Tell Everyone I Said Hi, is the winner of the 2012 John Simmons Short Fiction Award and has been published by the University of Iowa Press. His work has appeared in McSweeney’s Quarterly, The Rumpus, American Short Fiction and New Stories from the Midwest 2012, among other publications. He is the recipient of awards from the Bread Loaf Writers’ Conference, the Sewanee Writers’ Conference, and the Illinois Arts Council. He lives in Monmouth, Illinois, and is an associate professor of English at Knox College.

BONNIE CHASTEEN
Bonnie Chasteen grew up in a little mill town west of Asheville, North Carolina, where she spent summers helping her family raise vegetables and butcher chickens. She showed an early talent for drawing and painting but turned to literature and writing in high school. She earned a bachelor's degree in English from UNC-Charlotte and an master's degree in creative writing from Purdue University. While she has worked with words most of her life (she is an editor with the Missouri Department of Conservation), she has always sought out courses, workshops and tutorials with local artists wherever she has lived. Locally, she has studied with or painted alongside Naomi Sugino, Jane Mudd, Frank Stack, Byron Smith and Gloria Gaus, among other artists. In her paintings and drawings, she looks for a fresh, expressive view of the ordinary, whether it is the human face, people at work, landscapes, or still lifes. Her drawings, pastels and paintings have appeared in the Frame Garden Gallery in Livingston, Montana, and in the Bingham Gallery on the University of Missouri campus. Her first solo show is currently on exhibit in the gallery at Orr Street Studios.

Orr Street Studios is located at 106 Orr St. in downtown Columbia, Mo. Join us the third Tuesday evening of each month during the academic year for literary readings and visual-arts presentations.